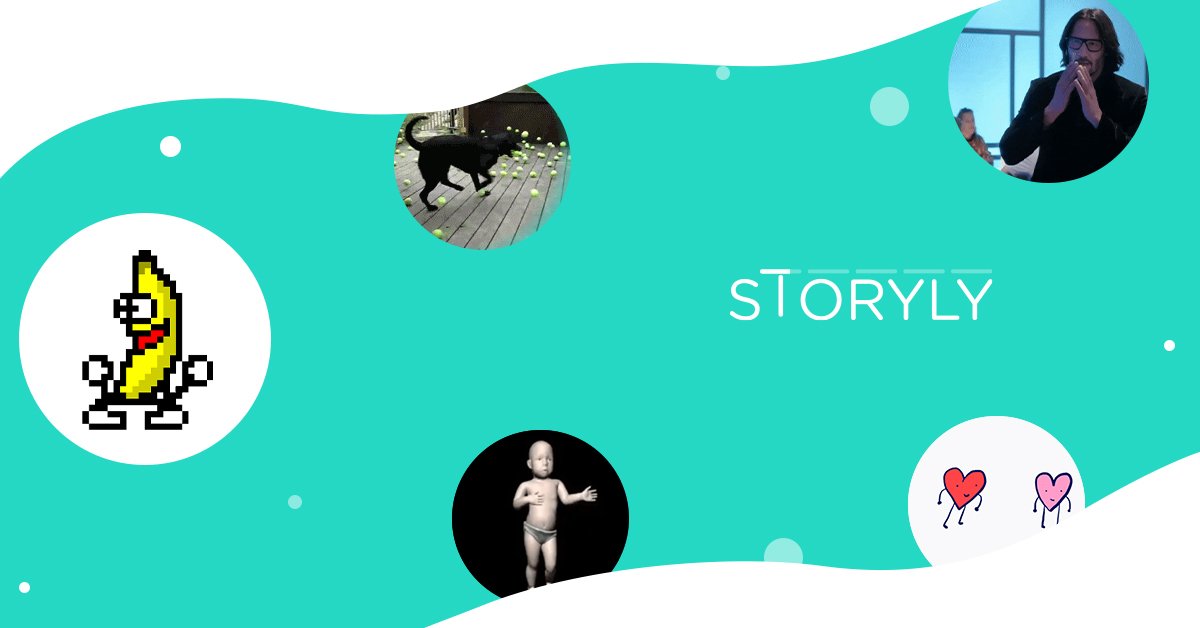 History of the GIF from Steve Wilhite to Giphy

Steve Wilhite, the inventor of the GIF, recently passed away at age 74 after getting COVID. After Wilhite’s death on March 14, 2022,  millions of people started wondering about the details of his biggest legacy: GIF (Graphics Interchange Format).

As an interesting fact, GIFs are older than the World Wide Web itself. Steve Wilhite introduced the GIF on June 15, 1987 while he was working at CompuServe, the first major online service provider in the US. CompuServe was founded in 1969. It was a self-contained network and it wasn’t connected to other computer networks. File exchange was one of the fundamental services that they were focusing on. Initially, they were using the black-and-white image format called RLE (run-length-encoding). When Wilhite created GIF in 1987, it became a more powerful solution since it supports a color image format and up to 8 bits per pixel for each image.

When you think about it, it might seem surprising to see the GIFs in their thrones: they have pretty low quality in terms of color support, they are autonomous, you can’t start or stop them and they don’t support audio at all. However, we can’t spend a day without using them. How? Let’s dive into the past of the GIFs to discover how they reached their popularity.

The GIF stands for Graphics Interchange Format. When it was first created, animation, as we know today, wasn’t even a consideration for GIF format and it could only store 256 colors (the latter is still valid). Its main existence was built on Lempel–Ziv–Welch (LZW) compression.

Previous compression algorithms such as “run-length encoding (RLE)” compressed files by storing the repeated data as a single data value. RLE was widely used for black and white images.

On the other side, LZW encodes the images by creating and referencing a dictionary of common patterns. This means that LZW allows the computers to invent a new phrase like “blite pixel” for “blue pixel, white pixel” combinations, and also “bliteple pixel” for “blite pixel, purple pixel”, etc.

In 1989, GIF had an update which allowed animation delays and also one color in the image to be transparent. The first means that a simple animation in GIFs as we know today started and the second means that GIFs were freed from the rectangular format. This was the last update of GIF format and it hasn’t changed since then.

CompuServe provided downloadable conversion utilities for many computers to boost the adoption of the GIF.

In 1991, Tim Berners-Lee opened the web to the public and in 1993, the Mosaic web browser became revolutionary. In those days, if you were to create an HTML page, you couldn’t embed an image code in it. Marc Andreessen of Mosaic announced the <img> tag in 1993 to make it possible to embed images. However, many people disagreed with this since this tag could only embed images, not other media files.

Marc Andreessen won out this battle over tags. Hence, the beginning of the animated GIFs on the web was postponed. You needed to add a GIF as a still image to display it on Mosaic browsers.

“After all the work and success, it turned out that suddenly there was a patent. No one in the community at large had known.”  Michael C. Battilana, The GIF Controversy: A Software Developer’s Perspective, 1995

As Michael Battilana pointed out, although LZW compression was widely used and CompuServe used it for the GIF format in 1987, Unysis had already granted a patent on LZW compression.

In late 1994, it was announced that Unysis would license LZW compression to CompuServe for use in the GIF, in exchange for a fee. This caused an outrage, GIFs were going to start costing money.

Pat Clawson, President, and CEO of one TeleGrafix Communications Inc. wrote a protest letter after the announcement:

“The announcement by CompuServe and Unisys that users of the GIF image format must register by January 10 and pay a royalty or face lawsuits for their past usage, is the online communications community’s equivalent of the sneak attack at Pearl Harbor.

The announcement of the CompuServe-Unisys GIF Tax on December 29, during the lull between Christmas and New Year’s Day, was clearly timed to cause maximum damage while an unsuspecting public celebrated the holidays.

We expect that the CompuServe-Unisys action will spell the death of GIF as a commercially viable technology, shifting the attention of the online communications community to JPEG imaging.”

After the announcement, the engineers including those who took part in the creation of JPEG started to debate GIF alternatives on the Usenet newsgroup “comp.graphics” under the name of “Thoughts on a GIF-replacement file format”.

Ping is not GIF

In 1996, the mentioned group of engineers released the first version of Portable Network Graphics (PNG). The firstly proposed name was PING, Ping is not GIF. The name eventually became PNG, yet the pronunciation remains as of PING.

PNG supported thousands of colors (GIF format supports only 256 colors), offered better transparency and it was completely open-source and patent-free. However, PNGs couldn’t animate, because the creators of the PNG didn’t want animation.

The PNG increased its popularity but couldn’t erase the GIF, even after Burn All GIFs Day. In 1999 Unysis renewed its efforts on LZW patents which would expire in 2003 and 2004 (first for the US and the latter for outside the US). The League for Programming Freedom, trying to announce to the world that the GIF is evil and also to push PNG, came up with Burn All GIFs Day to take place on November 5, 1999.

In the following years, Unysis enforced licensing fees on only big organizations that directly purchased the rights to use GIFs for financial benefits. In 2004, Unysis patent on LZW compression expired worldwide.

In 1999, the GIF format was almost murdered, but it survived and reached modern internet times. Of course, it is very rare now to see still GIF images since there are better formats such as JPEG and PNG, yet animated GIFs have no rivals.

Popular Mechanics gives us a secret about our modern-day animated GIFs: behind that animation, there is no “.gif“ extension. Some of the GIFs we see on the internet nowadays, they are just video files acting like animated GIFs, playing on mute, looping forever and don’t display control bars.

GIFs contain every frame of animation we see, however, this is not the case for videos.

Popular Mechanics explain the difference with the above video. As a GIF, this video takes up more than 60 MB since every frame is stored as a complete image. However, in a .mp4 format, it takes up less than 3 MB because transformation between frames requires smaller instruction.

How come we continue to use GIFs even though there are better alternatives in terms of quality and saving space. Because they are easy to use. They don’t require plugins or codecs. They work everywhere.

In the old days, playing a video on the web was complicated, the process required plugins. But after HTML 5 improved video, video format has risen as a rival to the GIF.

In 2014, Gfycat started to convert GIFs to video files. And then Imgur came with GIFV. GIFV serves video files on HTML. On appearance, it doesn’t look different than the GIF.  But it is not a GIF nor a video. It just makes videos work like GIFs and requires an internet connection to work.

Having been recently acquired by Facebook in May 2020, Giphy is an online database and search engine that allows us to search or share GIFs and GIF-like formats. If a GIF is on Giphy, you can use this GIF on your social networks that allow it. So, it handles the problem of sharing a GIF from one medium to another.

Since the popularity of GIFs rises every day and this dynamic content form performs really well across different platforms, Storyly integrated Giphy into the creator studio. Now, Storyly users can easily add GIFs to their in-app or web stories they created using Storyly Studio.

There has been an ongoing debate over how to pronounce the GIF.  Many assumed that it is pronounced with a “hard g” as “gift without t”, because GIF stands for Graphics Interchange Format and not for Giraffics Interchange Format. However, the creator of the GIF, Steve Wilhite, by referencing the peanut butter brand JIF’s slogan, said “Choosy developers choose GIF.”

Witnessing and impacting the evolution of the web, GIFs have come a long way to gain its popularity today. They are not just file formats, but they are one of the essential messengers in our lives, they substitute our moods, words, emotions…

To learn more about GIFs and how you can adapt them to your mobile strategy, continue with How to Boost User Engagement with GIFs? 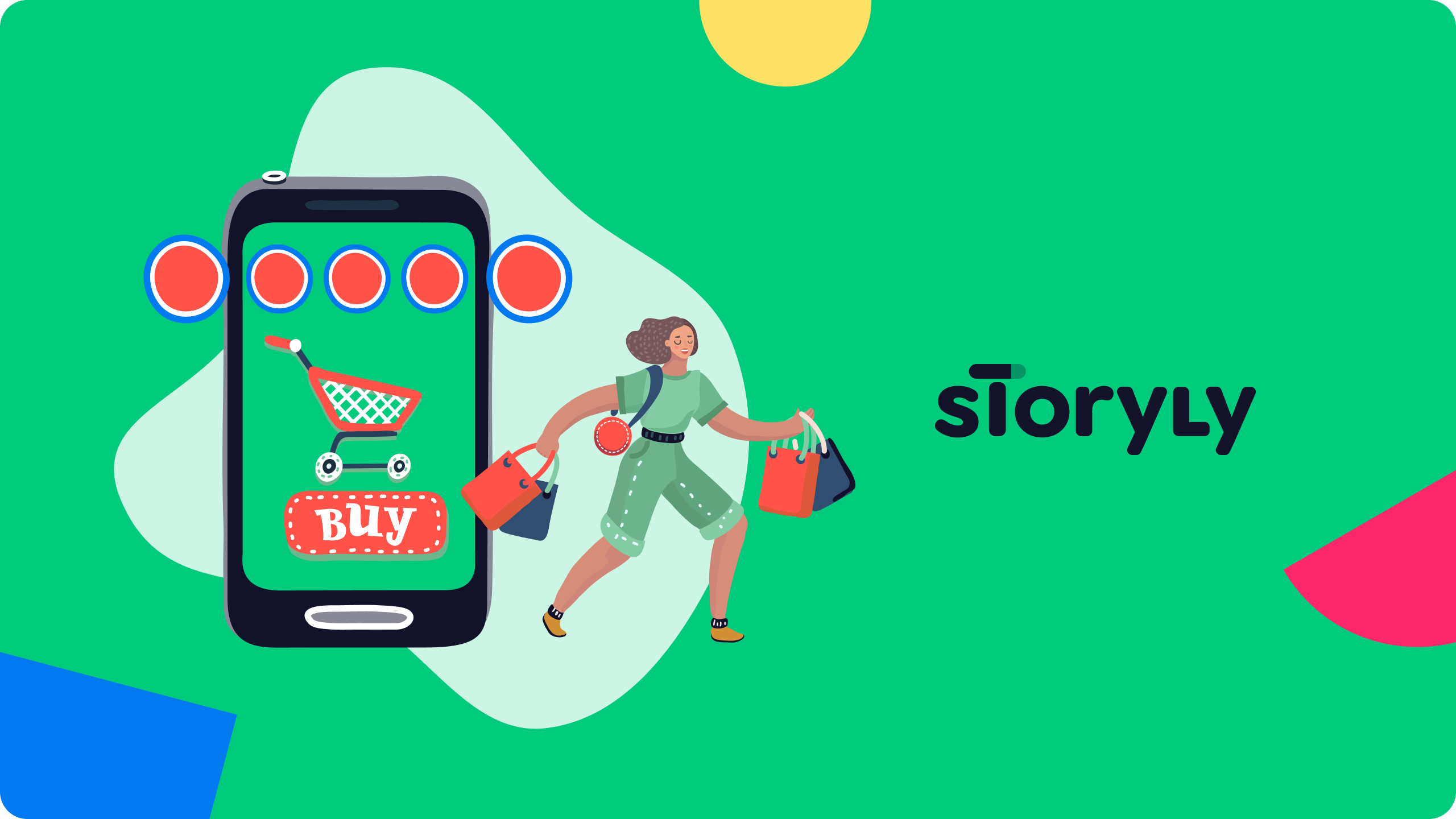 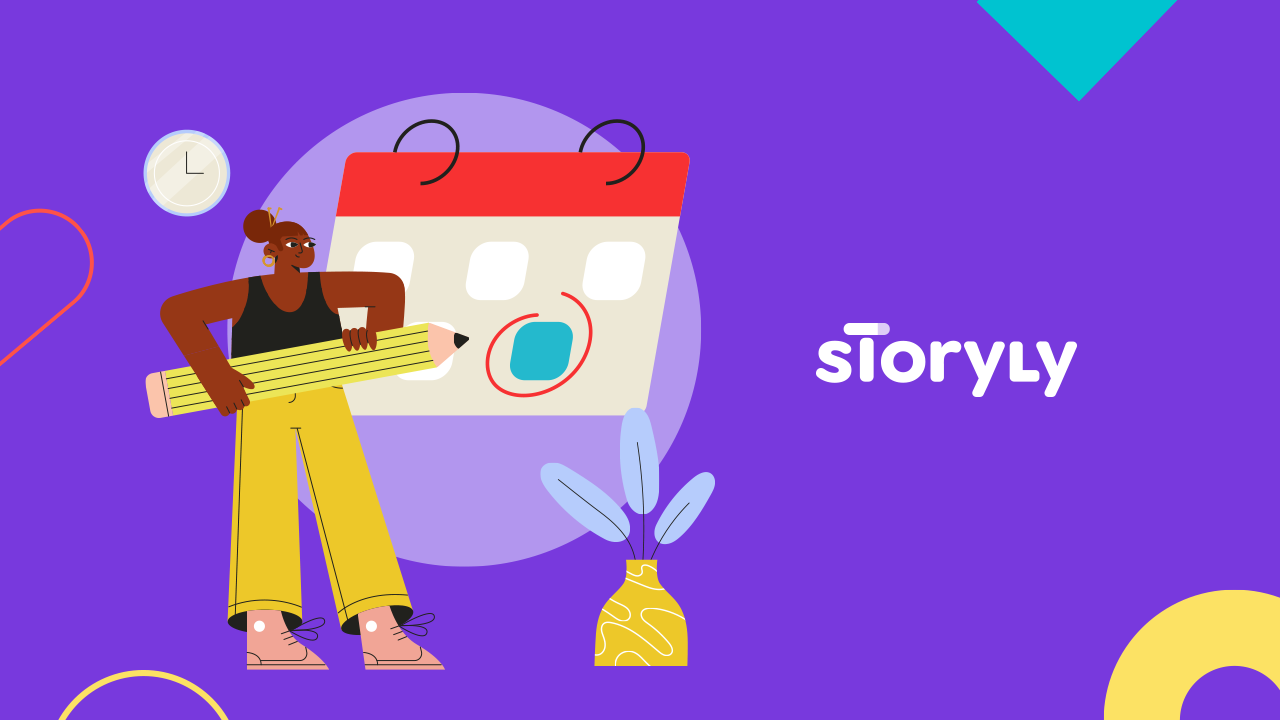 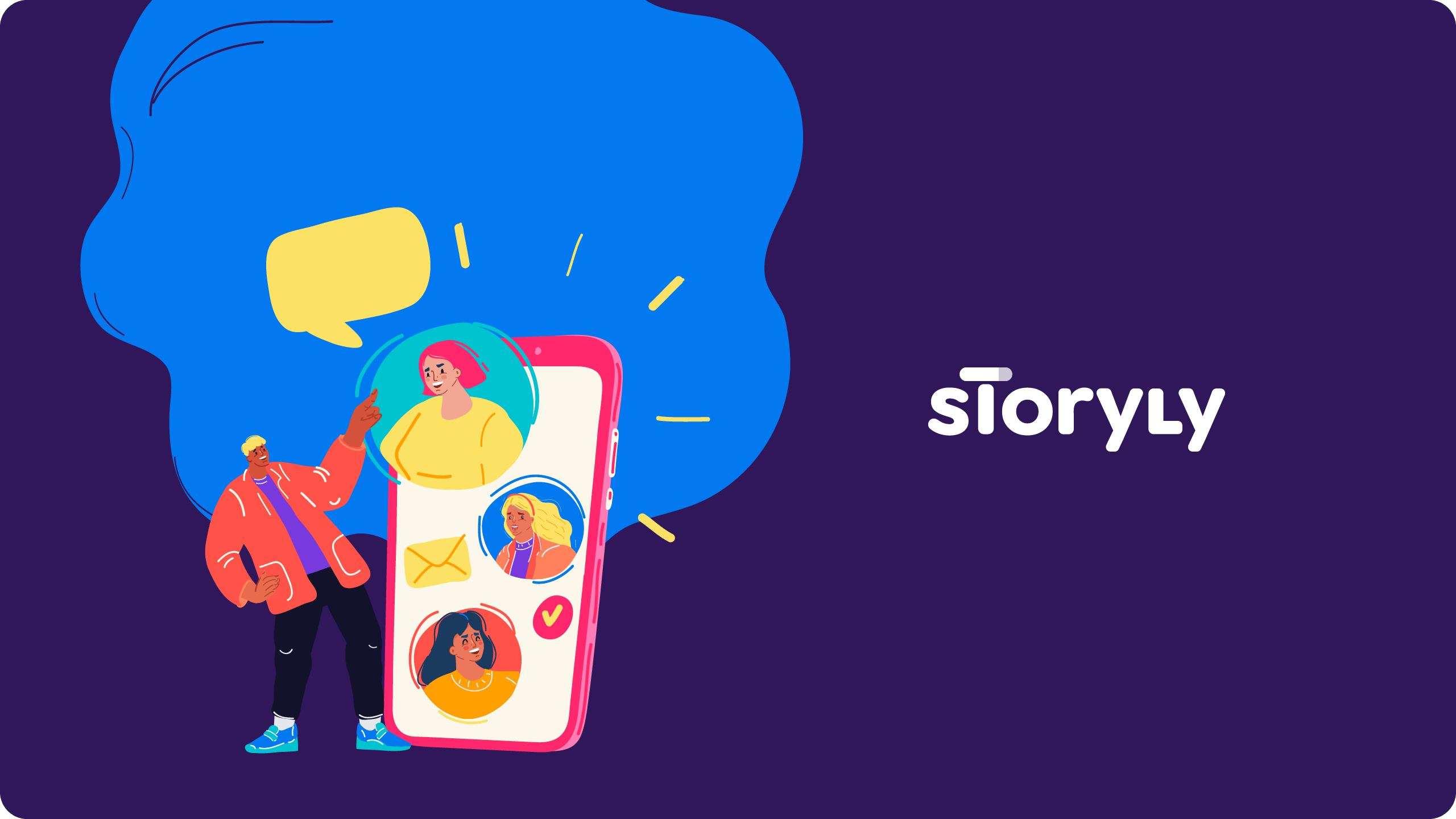